It was 1997, the fall semester of my junior year at Vassar College, only my second season playing rugby ever. Our coach, Tony Brown, drove the team down to Princeton, NJ, in a school van, where we were to play a match against Princeton’s B or C or D side (all I can remember is that it wasn’t their A-side).

I was not a starter yet, but I was hopeful that I’d get some time in the game as a hooker, the position I had been training at since I began in the Spring semester, having been recruited off of the soccer field by Coach Brown. 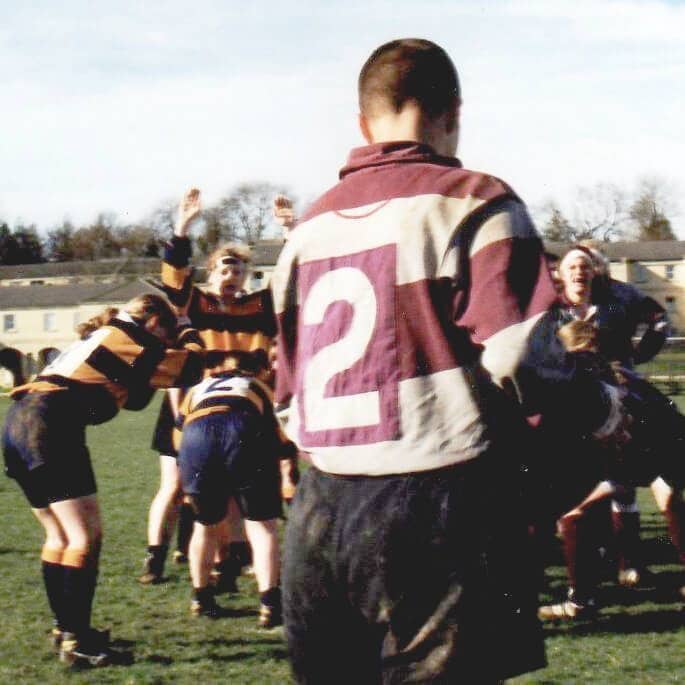 I don’t remember a whole lot about the game before the starting hooker got injured and had to be taken out. I know that we were losing and morale was low. Despite my concern for the starting hooker, I was excited to go into the game. I was pumped and ready to hit some ruggers! I remember that it was our kick-off and I’m sure somebody yelled – “who wants the first hit?” And I’m sure that I yelled back, “ME!!” or “I do!!”

Then there was the kick – a nice high kick that spread out maybe a few meters deeper than the 10 meter line, and I was off like a race horse, sprinting as fast as I could towards the rugger who was fixing to catch the ball. I think I saw her catch it, but I don’t really remember because she apparently hip-chucked me right in the forehead as I went down to tackle her, then I fell to the ground like a sack of potatoes (this was what someone told me later) and I proceeded to have a seizure on the field. Mind you, I am not an epileptic and I had never had a seizure before then nor have I ever had one since (as far as I know).

I didn’t know that I had a seizure, and when I woke, I was certainly confused about what was going on. Someone – maybe my coach – was asking me questions like what day it is…I couldn’t say for sure, but I deduced that it was fall so I guess it was maybe September…and they may have asked me my name or birthday, but I may have stumbled on one of those, then they asked who the president was, to which I responded, “Oh, I know this one!” But it took a moment as I stalled to remember…then I shouted “Clinton is the President!” or something to that effect.

Anyway, from the field, I was put on a stretcher and loaded into the ambulance, then we drove to the nearby Princeton hospital (probably associated with the university). I’m pretty sure they gave me a CT scan immediately, then I don’t remember them taking that long before I was cleared to go home with my team. I recall that once I was in the van with them I felt a bit nauseated while we were driving. We had a box that had had fruit in it, and before we were able to pull over to let me out to vomit, I had already vomited in the box.

I had a couple of friends spend the night with me at my off-campus apartment (they would eventually become my roommates) so that they could wake me every few hours during the night, as per concussion protocol. I was told that I couldn’t play rugby or any sport, really, for about a three week period, then I would have to gradually build back into it. I remember riding a bike at the gym and really feeling frustrated that I couldn’t do a whole lot. But eventually I did recover and was allowed to play rugby again.

It’s hard to recall the rest of that season in the fall of 1997, but I know that I came back to playing with a vengeance because it had been so frustrating watching on the sidelines and not being able to play. I also remember coming to the realization that I cannot just bolt out of the line like a bat out of hell when I come up on defense, that I need to be a bit more conscientious of my teammates and of my tackling target. So I guess I made some adjustments to my performance – and this earned me the award of Most Improved Player by the end of the season! I was truly honored.

I have been playing rugby on-and-off for 20 years now, although mostly off (I went to grad school and they wouldn’t allow me to do anything other than school, then after I returned when I started a postdoc in San Francisco, I had another injury – torn rotator cuff – which made it more difficult to return for awhile, so that also cost me some time off from rugby). I now live near Portland, OR, and play for ORSU (ORegon Sports Union).