Simon Fathers is a performance specialist who has worked with professional athletes from the NFL, NHL, MLB, Rugby, Rugby League, AFL, MMA, World Tour and Big Wave Surfing, Olympic Sports and the US Special Forces.

Originally from New Zealand, Simon grew up on a farm, playing rugby and surfing in the South Pacific Ocean and as a result, has a unique understanding of functional strength and rotational human movement.

His 15-year journey through professional sporting and elite tactical environments have resulted in global recognition for his expertise in movement training and rehabilitation where his commitment to keeping athletes motivated and energetic while executing a cutting-edge strength and conditioning workout.

“The cornerstone of how I approach every training goal is to keep my clientele motivated and energetic. An individual may have ample amounts of skill, but their body will not work to its highest potential if their mind is not in absolute conjunction.

I am honored to call Simon a good friend as we flatted together a few years ago. While flatting together, I got to see the level of preparation and commitment that is needed for success in professional sport. We would continuously discuss improving physically and mentally to put the best performance on the field. Having a knowledgeable friend has helped my game and attitude toward becoming the best athlete and person I can be. Continually improving, hard work and having a clear vision have been fundamental in his coaching and training.

Humans can not outperform their perception of themselves, see yourself doing it or it won’t happen

He has worked with some high profile athletes across many sports, but some of the Rugby players he has worked with are a Professional rugby player, Gold Coast Titans and National Rugby League player Clinton Toopi and professional rugby player, Bay of Plenty Steamers and New Zealand 7s National Team member Zar Lawrence. He played a pivotal role in Argentina’s transition into the Rugby Championship.

He has been a strength and conditioning coach for Waikato Rugby Union, Bay of Plenty Rugby Union, Golden Gate Rugby and now he is taking on the new challenge with ProRugby USA as head of performance, skills/assistant coach with San Francisco.

Simon entered the performance training industry through his experience in Rugby Union and Semi-professional Rugby League. It was on the back of numerous shoulder injuries that he sort out the help to rehab effectively and return to the game. Looking back Simon said he was solid in the gym when it came to his bench press, squat and big muscle groups but only in a very linear movement pattern.

Functional movement, multi-direction strength and having good pillar strength are what would have taken him to the next level and many of his athletes (including me).

Pillar Strength is having strong muscles and combining strong shoulder, torso and hip strength for rotary movement or multi-directional movement similar to what you would experience in Rugby.

How has the Pro Rugby USA been?

It’s an inspiring time for Rugby in the USA. The new pro rugby competition is shaping up well and providing excellent opportunities for athletes to experience and play in a pro-environment. The game is in the early stages, but we have already had a lot of interest and signed some talented world class players. It is a positive step for the game and provides a pathway for aspiring young players to represent their country or player abroad.

What are the 3 best exercises for functional movement?

What are the 2 best prehab exercises to minimize injuries?

What is your favorite conditioning drill?

It’s a drill called shark tank! (Based on a wrestling drill). A group of 6 athletes attempts to keep 1 athlete within their circle as the athlete in the middle tries to escape. I usually give the player a repeat sprint punishment if they don’t escape. I find it provides the player with more motivation to work harder.

What is your favorite skill development drill?

Playing a game that simulates game play. Attacking the try line with focused small sided games 6v8. It does many things, including:

What is the difference between club rugby and being a professional rugby player?

Players need to be strong enough and to have the physical fitness and conditioning to cope with the increased volume and higher intensity of training. Being prepared to do what is necessary to put the best performance on the field.

When I was training the Argentina national team we did a lot of plyometric work, max strength work and functional preparation to get the team ready for the higher intensity, heavier collisions and to minimize injury. Having good Tissue tolerance and elasticity of the tendons and myofascial connective/contractive tissues is usually the limiting factor for new professional athletes and when higher volumes of running, lifting and rugby impact you will need resilience and ability to cope with the amount over a week/month/season.

What is the difference between USA rugby and New Zealand Rugby?

Example: This season during the new Pro league we couldn’t find fields to train on and didn’t have a team base. The All Blacks are a roaming team meaning they train out of different establishments but they are far more resourced with better fields and infrastructure opportunities due to NZ being a favorable rugby country and it’s national sport. USA rugby is competing for infrastructure with many other major sports such as baseball, American Football, lacrosse and even soccer. In big cities, it’s hard to source fields due to the fact most fields are American football/soccer fields, and these dimensions are smaller than most rugby fields.

Another factor contributing to a difference between NZ & USA athletes is the lack of internal competition. Internal scrapping between USA National & clubs has been detrimental to the development of previous professional or even collaborative local leagues. Support from the top down doesn’t exist in USA where it has done in NZ for a long time. The lack of potential for the USA’s best athletes to compete locally has meant the best players are aboard professionally and this degrades the local club competitions and struggles to allow other good players at home important challenges that would otherwise help them sharpen themselves on a regular basis against their elite pairs who are playing overseas.

This lack of local competition eliminates the ability to create meaningful challenges for your high-performance development teams that are based out of the Olympic center in Southern California mostly. Other private programs are around but they struggle for support, and it’s not integrated, and they seem to roll solo so again it struggles to create international, high-performance momentum and improve the level of the second tier athletes.

If you had one piece of advice for young players what would it be?

Write down your vision and share it with the critical people in your life. Tell those people so that they keep you honest and focused when it gets tough. Have the belief that you can make it and be visualizing the result or your vision. See it, smell it and taste it. Some great friends of mine once told me “Humans can not outperform their perception of themselves, see yourself doing it or it won’t happen.”

Thanks for taking the time to catch up with Simon and we wish you the very best with the season ahead. If you would like to learn more about Simon and make contact check out his company SFPT.

10 things you absolutely MUST take on rugby tour 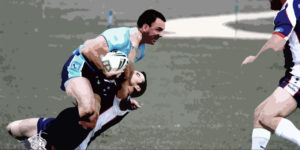