The Oxidative System for Rugby Fitness

Your body is an amazing machine. Not only is it made up from over 206 bones, 600+ muscles, dozens of organs, and literally billions of cells, it is also a walking, talking, rucking power station. Your body contains and can produce huge amounts of energy so that you can (hopefully) run rings around the opposition – with the appropriate training of course!

Your body uses three systems to produce energy. These systems are usually discussed in isolation but, the reality is, they overlap and are all working at the same time. It’s just that, depending on how quickly energy is required, one system will be more dominant than the others. The three systems for energy production are:

1. The ATP/CP system – used predominately during short (10-12 seconds or less) but very high intensity activities such as a big tackle, a jump in the lineout, or a 1RM attempt in the gym. Fuel for this system is the chemical energy located within your muscles. The ATP/CP system is anaerobic, meaning it functions without oxygen.

2. The glycolytic system – used in longer, slightly less intense activities such as sprinting the length of the pitch or a period of attack or defense lasting a minute or so. Fuel comes from glucose/glycogen, and this system will produce energy for 12-60 seconds before you’ll need to slow down. The glycolytic system is also anaerobic.

3. The oxidative system – used predominately in longer duration, lower intensity activity. Fat and carbs provide the fuel and, because these substances are stored in abundance in your body, the oxidative system can produce energy all-but indefinitely. That’s good news because it’s the system you are using right now to keep you alive. The oxidative system is aerobic, meaning it needs oxygen to function.

All three systems produce a substance called ATP, short of adenosine triphosphate. This is your energy currency. Whether you are running a marathon, doing box jumps, or sleeping, ATP is your source of energy. The only difference is how it is produced.

How does the oxidative system work?

The main characteristics of the oxidative system are low power but long duration. There are three processes or ‘stages’ which produce ATP. Each stage involve several complex chemical reactions which is why aerobic ATP production is slower than the other two energy systems. When it comes to energy, the more complex the process, the longer it takes to produce ATP.

The three stages are:

Each stage is responsible for producing a different number of ATPs:

Stage one – aerobic or slow glycolysis

Aerobic glycolysis involves the same series of reactions as the glycolytic system, commonly referred to as fast glycolysis. The main difference is that slow glycolysis occurs in the presence of oxygen.

The end product of the breakdown of glucose is a substance called pyruvate. Without oxygen, pyruvate is converted into lactic acid, something that all ruggers are intimately familiar with. However, in aerobic glycolysis, pyruvate is then converted into a substance called acetyl coenzyme A. Further ATP can then be produced by channelling acetyl coenzyme A into the Krebs Cycle.

The Krebs cycle is a series of close to a dozen chemical reactions that continues the oxidation of glucose that began with aerobic glycolysis. Fatty acids, from fats, and small amounts (<5%) of amino acids, from proteins, are converted into more acetyl coenzyme A.

Along with acetyl coenzyme A, fatty acids and amino acids enter the Krebs cycle and are broken down. This results in the production of ATP and carbon dioxide, which is exhaled. Hydrogen is also produced which is transferred to the electron transport chain – the next stage.

The hydrogen produced in the Krebs cycle and during slow glycolysis results in increased acidity within the working muscles. If acidity is allowed to get too high, all energy producing reactions will grind to a halt. To prevent this, hydrogen combines with the enzymes NAD and FAD and is sent to the electron transport chain where it combines with oxygen to form water, lowering acidity in the process. The water is then exhaled along with the carbon dioxide.

Ruggers are often very focused on their anaerobic fitness. That’s not really surprising as the start/stop nature of rugby means it is largely an anaerobic sport. However, the oxidative system is your “default setting” between bouts of anaerobic activity, and the better it functions, the faster you will recover from short, intense, activity. Think of aerobic fitness as the foundation on which anaerobic fitness is built.

Steady state cardio – long duration, low intensity workouts such as jogging, cycling, swimming, or rowing. Workouts should last 30 minutes or more, up to 60minutes. Your pace should be comfortable, and you should be able to maintain a conversation as you exercise.

Fartlek – Swedish for speed play, a fartlek session involves unstructured interval training with periods of increased intensity followed by periods of easier recovery. For example, running/cycling where you pick up the pace on the hills and then slow down for 90 seconds after each effort. Interval length and intensity should be mixed and random to train a variety of levels of aerobic fitness.

Don’t underestimate the importance of the oxidative system – it’s a vital component of rugby fitness. Hitting the gym and doing sprint intervals are undeniably important, but you’ll get better results, recover faster, and perform at a higher level if your anaerobic training is accompanied by a decent level of aerobic fitness. 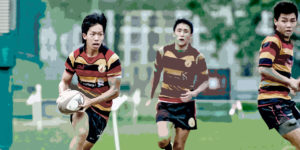