The worst rugby injury of my life was actually a bad string of moments in a single tournament and a short amount of time afterwards. I had just gotten back from a two year mission for my church and was really craving some good, hard, rugby.

My first semester back, nobody seemed to be able to tell me where I could find any rugby to play, until I heard about the 7’s tournament in Las Vegas. So like any other desperate rugger, I looked to round up enough guys to put a team together. 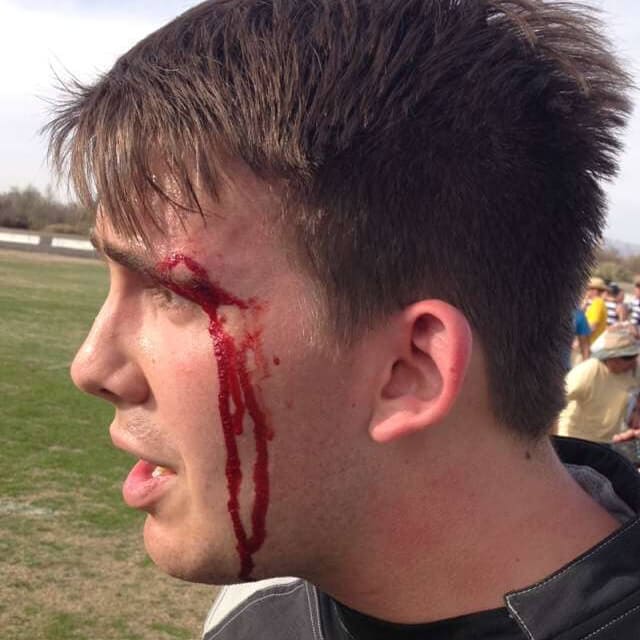 Once we had rounded up some bodies to put on the pitch, we started attempting to practice. Just like that, people started disappearing and we couldn’t get any commitment from anyone, until one of our guys from Wyoming suggested we meet up with a team he had played on previously. We thought that sounded just fine and tried our best to keep training for the tournament.

Try as we might, the weather had other ideas. It gets cold fast in Rexburg, Idaho and before you knew it, I had bronchitis and shin splints. After a handy-dandy prescription from a doctor and a metric ton of ice, I was playable and could manage sprints with a little discomfort, but not at my best by any means. Eventually, we actually made it to Las Vegas with our little ragtag team that had never practiced together before.

We all met up on the first day of the tournament and went over positions and a loose game plan. We struggled to hold it together in any of our games and it was mostly just chaos. There were some good offloads but a general lack of communication. I really didn’t feel the full effect of than until later on.

The first injury I encountered was during the first half of our last game on the first day. I was charging in to ruck over the ball when the ball carrier stood back up and smashed his head with mine. It split open my eyebrow and required some liquid stitches after the game was over. I remember not even having to ask the nurse who did it if I could play the next day when she reluctantly stated that I could probably get away with it. I’d say that was a mistake, but I can never regret playing rugby.

So the next morning, I woke up and got out there with a shaved and patched eyebrow and we started the second day of the tournament. It went pretty much like the first day but there was a little more communication than there had been. One of my teammates tried to throw me a pass and go into contact at the same time and just entirely lost the ball backwards. I went to scramble and flip the ball from the ground to the next closest teammate and I got the ball out. The problem is that one of the faster players from a Yale team had me wrapped with my arms against my body.

The next thing I knew, I heard an awful crunch as my collar bone separated against the ground, which was closely followed by the rest of my body and then the player from Yale. He was a good sport about it though and helped me get back to my feet. We lost every single game in the tournament and I loved every moment that didn’t result in injury.

When we got back to Rexburg, I took some time off to heal. Apparently, when you take too much time off, you need to ease into things. I though that some touch was appropriate as soon as I got out of a sling. I guess it wasn’t. I was playing with some new guys and trying to teach them the sport when I pulled my hamstring kicking off. It was bad. I tore it the rest of the way the first time I tried to loosen it up and get it mobile. That was worse. I was out for roughly six months before I was able to get back to playing contact.

My hamstring still gives me trouble and I have since gotten significantly more educated on what’s actually going on there. It turns out that my biceps femoris, IT band, and rectus lateralis are all bound together with scar tissue. I’m working through some rehab to try and get them separated and independently functional again, but for now I’ll keep playing as hard as it will let me. I hope to be able to work through it all and play collegiate and maybe even some higher competitive men’s rugby.