I had been playing for this select side 7’s team last summer called Southern Exposure. At a tournament in Nashville, I experienced a mild nasal fracture during a chasedown tackle in our middle game. I was about to tackle the girl, and during the backswing of her stride her fist perfectly connected with my nose.

She was trying to “stiff arm”. I made the tackle, but my nose started bleeding and I knew it had broken so I had it checked out at the medic tent. Ironically, the girl who had broken my nose showed up with a cut eye while I was being examined after the game. I chatted her up only to find she had no recollection of punching me in the face…of course. 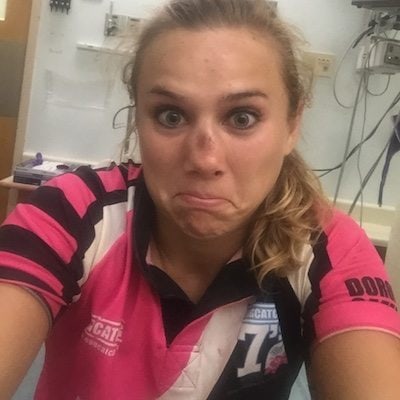 Two weeks go by and I’m playing in our last 7’s tournament–Pitch-A-Tent held by Chattanooga. My team made it to the final, and during the first half I caught an elbow to the nose during another chasedown tackle. Suddenly I couldn’t breathe out of my nose when I stood up. My nose had caved in from the blow that was only half the force of the punch that broke my nose two weeks prior, but my nasal structure had been weakened enough that this hit had resulted in a rare fracture of both nasal bones to the outside. I knew what had happened, but couldn’t resist reaching up to feel the divot in my face that used to be my nose.

The sidelines were boggle-eyed and putting their hands up to their mouths when I walked by and they saw my face. I heard plenty of “Oh shit’s!” I’m pretty sure our rookies were horrified. Hell, or vets were too. They were all just standing around looking at each other until someone finally said “ok don’t panic….but I think your nose is broken…” haha. Also, we didn’t even win the final.

Two teammates drove me to the local ER, where I paced around for nearly 3 hours before they took action. Staff from all over the ER dropped in saying “sorry, we heard about your fracture and had to see it ourselves.” Because that’s what a girl wants to hear about her face! No one wanted to touch it after they looked at my X-rays, but I didn’t want to go around looking like Frankenstein until I could get in with a plastic surgeon the next week. So one of their best ER docs came in and said he would do what he could, he couldn’t make it any worse. So he gave me a tranquilizer and dug around for a while.

He actually was able to somewhat set it to where I could breathe out of my left nostril. I was proud of him. But by the time I could get surgery, they had to rebreak everything anyways. It was a gnarly surgery and recovery, my eyes blacked out and swelled shut. A month and a few thousand dollars later I had a new, only slightly flatter nose than I had before the breaks! I started shopping around for masks and conditioning again to play. Unfortunately, most officials wouldn’t let me play with any sort of mask. My club team, Knoxville Women’s Rugby Club, however made it to South Championships and I was allowed to play! I’ve had to ditch the mask since and am trying my luck without it this season even though my nose is weaker than before. I’m more mindful than ever of my head placement in tackles… Fingers crossed!

One good thing did come out of the injury though… The girl who first broke my nose in the Nashville tournament turned out to be the love of my life! We now play on the same club team and she took great care of me post-surgery. So I guess everything has all worked out so far, as I don’t break it again this season. My doctor said I could lose bone support to my nasal cavity and have permanent deformity if I broke it bad enough again, but he would keep trying to fix it as long as I was too stubborn to quit playing.