It was the big training weekend before the fall season kicked off in 2016. We were taking pictures and role-playing action shots, so my teammate tackled me. Her knee drove into my calf muscle, which kind of feels like stubbing your toe, except half your leg. I walked it off, but damn…

It inflated over the course of a few days until I had an elephant leg and kankle. For a few weeks, it was hot and red. I posted a picture on Facebook, brandishing my rugby injury, when my old Minneapolis Menagerie teammate pointed out that I could get septicemia, or blood poisoning. 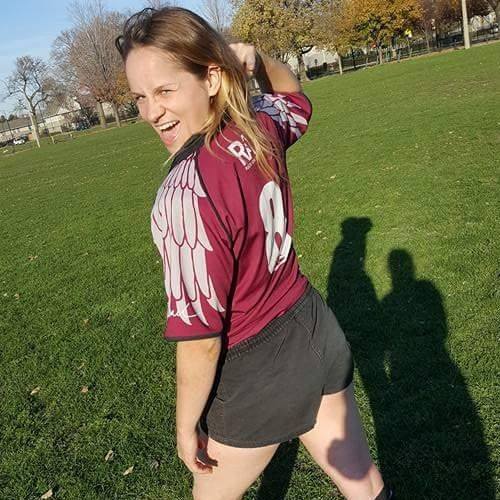 Injuries can get worse!

Septicemia can lead to septic shock when the infection causes organ failure, which of course, is life-threatening, no matter your age or physical condition. A doctor prescribed me a compression sock and a round of antibiotics. I also had to painfully massage the area to help break up the puss.

Infections are a huge risk

Unfortunately, after playing again, the infection reappeared. I visited Urgent Care, had the abscess drained, and took a second round of antibiotics and wore a compression sock again. More massing pus, too. Months later, the same type of infection appeared after sustaining another blow to my OTHER leg.

I had a third round of antibiotics, compression sock use, and painful pus massaging that year, and since then, I have not played rugby. The doctors will need to diagnose whether I have an inflammatory condition or an autoimmune condition to treat before I can get back on the pitch. Alternatively, I may craft leather cinch “shin guards” to protect my calves from heavy blows.

Blood circulation is poor in the lower legs, so cellulitis is more likely to happen with injuries there. I had a hip/thigh bruise that almost became a similar injury, but because circulation is better there, it eventually healed itself. Applying Rest, Ice, Compression, and Elevation can help prevent and treat injuries like these.

Abscesses can occur when a blow to the leg pulls the fat layer away from the muscle tissue, creating a pocket for bacteria to be trapped and grow. Although the environment under the skin should be sterile, a break in the skin invisible to the naked eye can allow bacteria to enter. Even athlete’s foot can allow bacteria to enter the blood stream and find its way to vulnerable areas in the body. I likely had a bug bite or minor abrasions from skidding over grass or even from shaving my legs. Perhaps it’s why athletes wear long socks, but that’s just a theory.

If anyone has had similar injuries and received a helpful diagnosis and treatment plan, I would be very interested in some feedback! Take care of your bodies to enjoy long, happy, and healthy rugby careers, and support your mates when they are injured to fully recover before encouraging them to play again.