The day before I broke my collarbone I was on my way to practice with teammates when I announced that I had never broken a bone. What a stupid thing to say.

Saturday, September 12th, 2015 BC was set to play our first conference match of the season against UConn. We got on the bus early Saturday morning ready to go put it all out on the field. First match excitement, brand new jerseys, and a solid team walked off the bus with me that morning. I was ready, I was pumped, I wanted to WIN.

Not long into the first half (maybe 10 minutes), UConn took advantage of our scattered defense and scored the first try of the match. Their try fired me up and I told myself the first tackle after the kickoff was mine; nobody would get by me. As soon as the ball was kicked I was up on the girl receiving, running top speed, ready to make the best hit I’ve ever made. 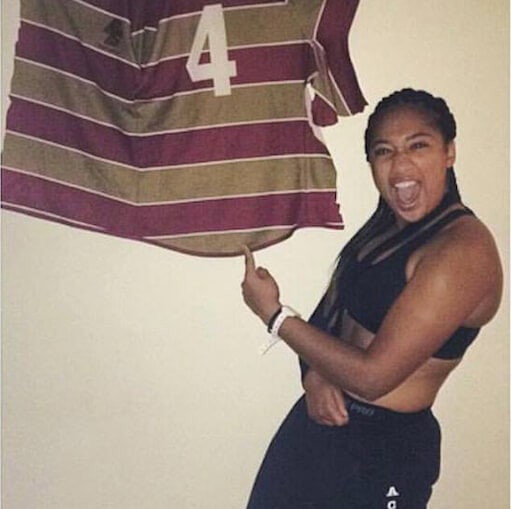 As soon as I made contact I knew something was wrong. I made the hit, but I couldn’t get up. My arm wouldn’t move and it felt like my shoulder wasn’t sitting quite right on my body. At this point there was so much adrenaline rushing through my body that I couldn’t feel the pain that would come rushing in just a few minutes later.

The trainers helped me up and helped me get my arm into a position where it was resting at my side, but they wouldn’t tell me what was wrong. They walked me over to the sideline, whispering among themselves about what was wrong with me, nodding and pointing and staring the whole walk over, but they wouldn’t tell me what happened! I wouldn’t find out that I broke my collarbone until I was driven to the urgent care clinic down the road at half time. And boy did I break it bad…

My bone had broken in two different places and was tenting so bad in one spot that it was almost poking through my skin. One part of the collarbone was sitting on top of the other part of the bone and would rub together anytime I moved. Because of the nature of the break, I couldn’t move my arm. This presented a problem when it came time to removing the jersey from my body. Sadly, we had to cut this brand new jersey (it had only been worn once before!) off of me, but fortunately it looked great hanging on the wall of the house of me and my teammates.

So the bone rubbing was probably the most painful part of the week between the injury and the surgery, however it was not the worst. The worst part of that week was finding out I was allergic to the Vicodin they gave me to control the unbearable pain when I broke out in hives and started to swell up in class the next day #STUDENTathlete.

So for the next few days I was stuck in bed trying to manage my pain with Advil awaiting surgery, making people touch my bone that was poking out, and comforting my parents who live overseas about a 13 hour flight away about their injury-prone daughter (me).

The day of my surgery my teammate drove me to the hospital where I met my brother who also lives in Boston. My parents had decided to fly in and stay for a week to take care of me but their flight had gotten delayed; they weren’t going to make it before my scheduled surgery. Thank goodness for nice nurses and doctors though because they waited for my parents to show up at the hospital so that I could see them before I went under. Mom hugged and kissed me, brothers laughed at me, and Dad took a picture of them trying to fit all my hair into 2 hair caps. The crew was back together again, and my bones were about to be too!

I now have 10 screws and a plate in my clavicle. I spent 6-8 weeks in a sling and months in physical therapy so that I could get back to playing this sport that I love. In March of 2016 I was cleared for contact and in April I returned to rugby in the most rugby way possible: at Beast of the East! Two years later and I feel better, stronger, and faster than ever. There were some really hard days where I felt like I’d never regain my range of motion or strength, let alone get back to rugby.

There were days where my pain was unbearable or my mental hurdles just seemed too high, but I was lucky to be surrounded by so much love and support. My injury really pushed me to improve myself and work harder than I knew I could. Since my injury I’ve played at USA Rugby’s Club 7s nationals twice (once with Boston Women’s and once with Scion), am now the captain of my BC team, and have gained a lovely piece of wall art (broken jersey + broken bone x-rays).