In the grand scheme of things, I’ve had plenty of rugby injuries in my brief 3.5 years of playing. Broken fingers, broken toes, so many bruises I looked like a dalmatian, and one concussion severe enough that I poured pasta directly down the drain after making it, attempted to pour coffee in an upside-down mug, and cried enough to end a long-standing drought.

However, the aftermath of one particular injury led to me always having a decent party story.

Having just moved back to Colorado and joined Black Ice Women’s team, I was eager to impress my teammates. We traveled to San Diego for the Champagne Classic Tournament, but by the fifth match I was exhausted. 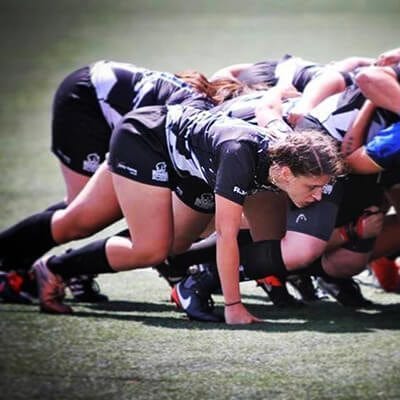 Coaches drill into every player across the globe the importance of a good tackle. But I have learned from experience in 100 degree heat, the brain slowly melts and the player is left assuming that leading with your face into a tackle is in fact a GOOD idea. As the opposition’s center flew towards me I awkwardly thrust my arms out like Christ on the cross and my face smashed into her wildly pumping legs. I heard the sickening snap and suddenly I was transported into what I could only assume was a Quentin Tarantino film, and I briefly wondered if my jugular had been severed.

The game continued as, on my hands and knees, blood gushed from my nose like a red Niagara Falls. Again, that melted brain didn’t quite function, and as bodies flew around me I remembered being concerned about bloodborne diseases, and attempted to catch the blood spurting out of my face in my hands. Like a deranged zombie I crawled on my hands and knees to the sidelines, focused on my aim to collect my own bodily fluid in my right hand.

Finally I successfully crawled off the pitch, blood-stained and my dislocated nose sitting inelegantly on my cheek. Following a mad rush to find a towel to soak up the blood still surging from my snout, an orthopaedic surgeon was wrangled into resetting my nose on the sidelines. A tampon was shoved indelicately up my nostril and I applied an ice pack.

But, the story doesn’t end there.

The next day I woke up to a puffy face. My eyes were so swollen it was a struggle to see and the bruising was just starting to form. I headed to the San Diego airport and began to notice all the stares. As a female rugby player let me just say that rugby injuries are met with an entirely different reaction than with men. As I was checking my bag in, an elderly woman came and patted my hand and simply said, “You don’t deserve it, dear.” People stared, some concerned, some horrified, and many people tried to avoid my gaze. Shuffling down to airport security I tried to look athletic and unconcerned. Handing my ID to the officer, he looked me up and down… then said “please wait here.”

Shifting my weight from foot to foot, I realized that I was going to be asked if I was a battered woman and tried to figure out how to explain this misunderstanding. He returned with two other officers and gruffly said, “you’ll need to come with me.” My planned speak stuck in my throat while I was led to a small room with a window overlooking the airport screening. I sat across from the two burly-looking TSA men and asked, “Is something the matter?”

“Is this your identification card?”

I blinked, confused. “Yes, of course.”

“When is your birthdate,” asked the stouter of the two.

“Where were you born?”

“Where are you traveling?”

A barrage of questions followed and I began to cry, tears barely leaking out of my swollen eyes, running down the rotund crests of my fat cheeks. “I-I-I p-play rugby!!!!! I-I-I broke my n-nose,” I blubbered frantically. “I j-just have a F-FAT FACE,” I wailed.

The officers were visibly uncomfortable. Tissues were shoved at me and I was released, black, blue, and sobbing, to rush to my gate with only a few minutes to spare.

When I finally made it on the plane, snot running from my now-crooked and swollen nose, the flight attendants looked shocked to see a puffy-faced crying woman with bruises beginning to form under her eyes, clutching at a box of tissues. Before I could make my way to my seat, the flight attendant told me I had been reseated and steered me into first class. For the entire flight I was hovered over and coddled, given free drinks and sympathetic stares.

So, hey, if you’re going to get injured… make it worth the story.