We’re making some great progress in the South signing up clubs for our unique sponsorship program. Today, we have the pleasure of welcoming the Knoxville RFC “Possums” to our family of sponsored rugby clubs. We’ve gone back and forth with the club’s management team for the last few weeks, but today is the day! Ruck Science will become the official nutrition supplier of the Knoxville Possums effective immediately. We look forward to helping grow their club and seeing them be successful both on and off the field. Please continue reading to see the specifics of the deal and how it will help to grow the game of rugby in the Volunteer state.

In the late 1970’s, a group of University of Tennessee alumni decided to branch out from the collegiate team and form Knoxville’s first city men’s club. In the spring of 1979, player Bobby Hampstead contacted the Chicago Lions—one of the top teams in the eastern United States—to ask for guidance and help setting up a new club. David Hall, the president at the time, responded with letters, posters, bylaws, and a surplus of advice, all Bobby needed to get the ball rolling. A meeting was set for the first Saturday in January of 1980 to finalize the details of the club. Borrowing the design from the letterhead of the Chicago Lion’s stationary, the Running Possum logo was created, jerseys were embroidered and the Possums were born.

The Knoxville Rugby Football Club has been a stand alone 501(c)3 Sports Corporation in Knoxville for over 35 years. They have their own playing field & park in the Carter community and have worked to establish and support High School Rugby in the area, with many of their current players serving as coaches. In addition to promoting rugby in Knoxville, the Club has worked directly with the Angel Tree, the Dream Connection, the Boys & Girls Club, Rev 3 and supported various other Charities. In the summer of 2016, and in partnership with the Smoky Mountain Athletic Club (SMAC) Rugby, KRFC began Tennessee’s first ever Rookie Rugby program, welcoming boys and girls of all ages to learn the sport through USA sectioned flag rugby.

Knoxville Rugby Club and its members continue to have a strong commitment to community involvement and support.

Watch them in action Vs Tennessee Tech Rugby

One really fantastic event on the calendar is the annual Santa 7s tournament. Held for over 30 years, and open to both men’s and women’s rugby teams, this is a festive social tournament, but with a catch–there is a weight limit on all teams and try scorers! Here are the details on this unforgettable tournament:

All players are weighed before the start, with their number written on their hand. The weight requirements are as follows:
Costumes and fun team names are strongly encouraged!
Other ways to support the club

But before you start shopping, please make sure you register for an account on our website. You’ll get $10 to put towards your first order and free access to all the eBooks in our resources section. 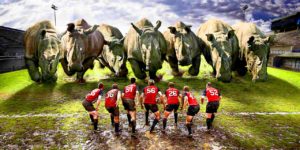