What’s the best ROM for a rugby player’s squat?

One of the most hotly debated topics in rugby strength training is what is the best squat depth for ruggers. Some coaches advocate super-deep squats, often known as ass to grass squats, and say that anything less is cheating.

Others state that you should only descend until your thighs hit parallel to the floor. More technically minded coaches may go so far as to recommend that your hip crease should be level with your knee crease at the bottom of each rep.

However, while all of these statements are valid, and may even be correct, there is a more critical question that ruggers should be asking about squat depth – how deep SHOULD they squat?

While deep squats can be very beneficial for some players, not everyone is built to squat ass to grass. Trying to hit this standard could cause serious and potentially career-ending injuries. Similarly, stopping your rep at parallel just because that’s what you’ve been told to do so may also be a mistake that could make your workouts less productive.

So, how deep should you squat? Let’s discuss!

Several factors determine how deep you can squat safely. Note that you may be able to squat deeper, but that doing so could increase your risk of injury without adding any extra benefits. The key to successful squats for ruggers is to determine your ideal squat depth. This is the range of motion that provides the greatest reward for the least amount of risk.

Tall ruggers usually find it harder to squat deep than shorter lifters. Long femurs and torsos increase the distance the weight has to travel and create unfavorable levers as they lengthen the distance between the weight and your base of support.

Some taller lifters may find they can squat deeper by adopting a wider stance, what a lot of trainers call sumo squats. While this may increase squat depth, sumo squats also tend to decrease quad activation while increasing hip stress.

Tall ruggers may also find that front squats allow for a bigger range of motion than back squats. However, most lifters can’t front squat as much weight as they can back squat.

While mobility and flexibility are two different things, they overlap enough that they can be discussed together. If you have tight hips, you won’t be able to squat as deep as someone who is much more mobile and limber.

Squatting deeper than your mobility allows can cause something called “butt wink,” which is where your pelvis tucks under, and your lower back becomes rounded. Any rounding of the lower back, especially under heavy load, should be avoided at all costs. It places a lot of stress on your intervertebral discs and spinal ligaments. If injured, these structures take a long time to heal. In the case of disc injuries, they may not heal at all and could require surgery to repair.

Ankle mobility can have a significant impact on squat depth. Tight calves will cause your heels to lift, and this problem is more noticeable when you squat deep. Heel lift during squats throws your weight forward onto your toes, reducing stability and muscle activation, as well as increasing the stress on your knees and posterior chain. Ankle injuries are all too common in rugby, so a lot of players have limited ankle mobility.

Lifters often attempt to “fix” this problem by placing their heels on blocks of wood or weight plates. While this can help you to squat deeper, it does so by treating the symptom and not the cause of the problem. If you have poor ankle mobility, the root issue should be addressed rather than just using a workaround, and that means ankle stretching and mobility work.

How are your knees? If, like most ruggers, they are pretty banged up, you may find that the condition of this joint directly affects your squat depth. The knee joint is a synovial hinge joint made up of two bones, the ends of which are covered in hyaline cartilage. Cartilage wear and tear can lead to a roughened articular surface, which may prevent smooth movement and limit your range of motion.

If you are a rugby veteran or have a history of knee injuries, you may find that the health of your knees limits squat depth, or that deep squatting exacerbates any existing joint problems.

Some squat variations are better than others for hitting maximum depth. Most lifters find that front squats and kettlebell goblet squats allow for a bigger range of motion. High bar squats, where the bar rests on the upper traps, are also good for deep squatting.

However, low bar back squats, probably the most prevalent squat variation in rugby, make squatting really deep much harder. The low bar position increases forward lean, which naturally limits the range of motion. There is a reason that powerlifters, who use low bar back squats almost exclusively, rarely descend below parallel. However, the good news is that low bar back squats let you lift more weight.

6. The reason you are squatting

Different training goals often necessitate different ranges of motion. For example, powerlifters, who are arguably the strongest squatters, only need to descend to parallel for their lifts to count. A deeper squat is just a waste of valuable energy.

On the other hand, Olympic lifters usually squat much deeper, which allows them to get under the bar so they can lift heavier weights.

Bodybuilders know that, for muscle hypertrophy, range of motion is often as important as the amount of weight being. They might even use methods that purposely increase the range of motion to trigger more muscle growth. For example, sissy squats provide an intense stretch for the quadriceps to specifically increase growth. However, the longer the range of motion, the lighter the loads tend to be.

Natural squat depth is often inversely proportional to the amount of weight being lifted. It’s much easier to squat ass to grass deep with very little weight on your back. Squat depth usually decreases as the weight gets heavier.

Ruggers need strength, power, and muscle size, and may need to squat to different depths according to their current phase of training. You might even use different squat depths within the same workout, e.g.:

How deep should rugby players squat?

It’s time to stop prescribing the same squat depth for all ruggers. With so many factors to consider, it’s clear that some players are better suited to deep squats than others. Long-limbed lifters cannot go squat ass to grass like a shorter player can, and veterans with a history of knee injuries should not try and match the squat depth of younger players.

Forcing squat depth beyond your structural limitations is a good way to get hurt. Ass to grass might make for a fun t-shirt logo or meme, but it’s a terrible idea for ruggers to think that they have to use the same range of motion.

Instead, squat range of motion should be determined by the needs and abilities of the individual. For some, that may mean squatting deep but, for others, a reduced range of motion will be more appropriate.

If mobility is limiting your squat depth, and you want to squat deeper, more stretching will help, as will foam rolling and myofascial release. In some cases, merely stretching the calves, adductors, and hip flexors will instantly increase squat depth. Sitting down and holding the third-world squat position for a few minutes per day can also help.

However, that doesn’t mean you have to squat to maximum depth. For some players, it’s just not necessary or beneficial. Instead of trying to adhere to arbitrary squat depth standards, experiment to find your own range of motion “sweet spot,” where you get the results you want with the least amount of risk. 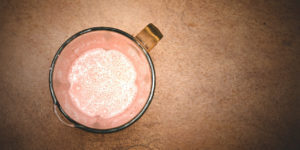 What is the ultimate rugby protein shake? 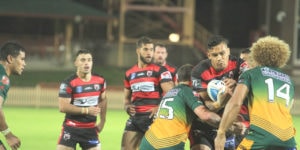 How much cardio do rugby players really need?