I started playing rugby in highschool in 2006 and managed to make it 10 years with nothing more than a twisted ankle or a good scrape. So when I my first injury happened of course it happened in a big way.

During the first practice of the spring season in 2016 2016 for my division 2 women’s rugby club, I shattered (as we affectionately call it) my right foot during a tackling drill.

My go to in contact situations is to throw a strong stiff arm…great when you’ve got the space and power, probabaly not the best idea in a close tackle practice. First bad choice. Second bad choice, partnering up with my team’s strongest tackler. There is no such thing as 50% with her. 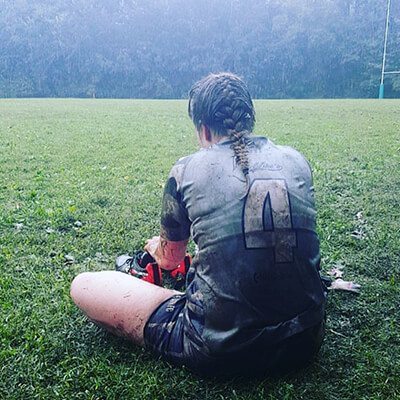 So fast forward to my coach using my training partner and I as the demonstration duo for the team. As we all broke off to work one on one I was pretty excited to be working with someone who is known for their tackling prowess. Famous last words. When I attempted to throw a stiff arm to avoid complete contact, we both tumbled. Somehow in the chaos of the fall my foot got lodged between the two of us. She and I felt the pop and snap, those around us heard it.

Let’s also say that I am the type to roll my ankles running the warm up lap. No one thought a thing of me hobbling off the field at first. However, I think the x-rays they received at 2 am made them all reconsider the validity of this injury.

I was immediately sent to the ER after my x-rays made my tech at urgent care cry and was scheduled to have emergency surgery at 6 am with a surgeon who I hear was flying in from Vegas at the time.

Overnight I was given a bionic foot with multiple metal plates, pins, and bone grafts. The works. I spent 3 days in hospital and received many visits from teammates which honestly makes the world of a difference when you’re considering that you may never play again. They also helped raise my spirits when thinking about the hospital bills that we’re headed my way. Thanks to USA Rugby insurance and my teammates who joined forces with our club’s men and highschool team to collect donations towards my bills I felt just as supported off the field as I had when I was running beside them 15 as 1.

As all Ruggers know recovery is the worst. You want so badly to be back on the pitch with 14 of the best people you know playing the best game there is! After a very impatient 7 months I was able to return to the field on my birthday no less! And was honored to be awarded Man of the match! Then even more honored when some teammates nominated me for Eastern Pennsylvania Rugby Union’s player of the week!

The injury sucked, and it still does sometimes. There is nothing like stubbing your toes that are pinned together with metal wires, but finding out how much your teammates and the entire rugby community cares sort of makes it worth it. 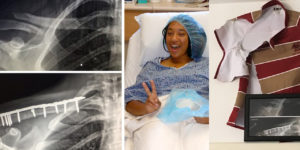