A couple summers ago, some of my 15s teammates and I formed a summer 7s team. Most of us had never played 7s and some were brand new to rugby in general. Our goal was to train and be a strong team for Pitch-a-Tent later that summer. In preparation, we signed up for several social 7s tournaments prior to Pitch-a-Tent.

The last one, Rock Hard 7s in Grand Rapids, Michigan, was the weekend just before Pitch-a-Tent. In the 2nd match of the tourney, shortly into the first half, I made a beautiful tackle on an opponent. I was pretty new to rugby and this was a textbook, powerful tackle that quickly dropped the ball carrier. When I got up, however, something felt off. 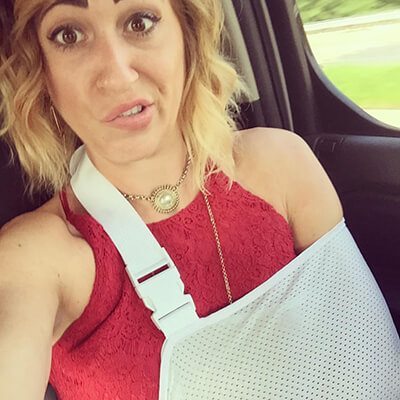 My shoulder was throbbing and my fingers felt numb. I stretched my arm out a little and played on. At halftime, our Captain, seeing that I was injured (no matter how hard I tried to play it off), refused to put me back in the game. I marched over to the Athletic Trainer’s tent to see what I could do to get the pain under control and get back in for the remaining two matches. The visit was relatively short, and I left with a bag of ice taped to my shoulder and told I’d likely be able to play again that day. After another 30 minutes though, it became increasingly clear that the tournament was over for me.

As the swelling set in, the pain in my arm became unbearable and the range of motion minimal. Unable to raise my arm, I knew I would not be able to catch, throw, or tackle, thus useless to my team in the remaining matches. Disappointed, pained, and frustrated, there was nothing else for me to do, but drink loads and loads of beer.

The next morning, after a rather sleepless night and requiring assistance to undress myself and shower, I decided I ought to go get some medical attention. After a few x-rays at the ER revealed no fractures, I was sent away with a bottle of narcotics, a sling, and instructions to keep icing my shoulder. While I didn’t have an answer for what I had done to my arm, I did know that I would not be making it to the tournament I had trained all summer for. So long Pitch-a-Tent, drunk rugby, smelly campers, and nakedness.

I spent the next couple weeks enduring intense shoulder pain, with an arm that wouldn’t extend more than 4 inches laterally. I decided on a whim to go see a chiropractor. To my complete shock, an hour after the adjustment I was able to almost completely raise my arm parallel to the ground, but something was definitely still not right with my shoulder.

My physician sent me off for an MRI and I finally had my answer – I had fractured my left scapula. Apparently scapula fractures are quite rare and usually the result of a high-impact motor vehicle collision. I guess my tackle was just that dang powerful. Jokes aside, treatment was basically immobilize the shoulder as much as possible for the next 4-8 weeks. For an avid gym goer and rugby addict, this all completely sucked! Fall 15s season was fast approaching and I was determined to be on the pitch for the first match of the season.

For the next couple months, I lived in my arm sling, learned to write with my right-hand, and everyday was leg day at the gym. Every night I did the exercises the physical therapist had shown me and as soon as I had to green light, I started lifting light weights to strengthen my shoulder back up. I gradually advanced the drills I would participate in at practice, staying out of contact drills until just before our first match. Disciplined and determined, and despite my hard-headed tendency to push injuries, I fully recovered my shoulder and was as good as new by game #1 of fall 15s. Unfortunately we got spanked that game, but individually, my rugby alter ego “EVA” was back!