In addition to the tackle situation, however, Rugby Union adds scrums, lineouts, mauls, and rucks. This variation in collisions not only makes the skill-set of a rugby player much more diverse, but it also means more collisions per player per match (pppm).

But rugby players still make tackles. Sometimes a lot of tackles. Loose forwards, in particular, are known for their work in this area. Some flankers will make as many as 25 tackles in an 80min game of rugby on top of around ten scrums and another 30 breakdown impacts.

Add it all together, and the average loose forward on the rugby field is involved in around 80-90 “collisions” per match. Just over one collision/minute.

It’s no surprise then that the players who succeed in these collisions are very often the best players on the field. But why? What makes a player successful during a collision? And can we learn how to improve rugby tackling when we’re not on the field? That’s what we’ll examine today as we look at how strength and power impact tackling ability in rugby.

What makes a (un)successful rugby player

As we mentioned in the introduction, collisions are a huge part of the game of rugby. In semi-professional and amateur rugby, players will experience a collision every 2 minutes or so. To withstand, recover from and excel in these collisions, rugby players must train for them. This holds true for every player on the field. A talented, skillful flyhalf is a beautiful thing to have on your rugby team.

But if they can’t tackle, they represent a defensive weakness that a clever opposition could potentially exploit. Your flyhalf doesn’t need to attend every ruck on attack, but they do need to be able to complete 1-on-1 tackles regularly and under pressure. Every player needs to be familiar with collisions.

Collisions are just as important for attacking players as for those more focused on defending. This is where your team gets across the gain line, and achieves “front-foot” ball. Players who are good in contact will get across the gain line more often, require more defenders to bring them down, make more breaks and score more tries than those players who are weak in contact.

Who is involved in the most collisions in rugby?

When we’re discussing tackling, remember that this is just one sub-category of collisions. Loose forwards are involved in the greatest number of total collisions (50-70). Followed closely by the Tight 5 (40-60) and inside backs (30-50) with outside backs (20-40) and the halfback (10-20) having the fewest collisions in a game of rugby. Yes, it’s important for everyone to be strong in contact.

But collisions are doubly important for the forward pack and inside backs since this represents a larger portion of their in-game experience. There are also several different kinds types of rugby tackles. Sometimes you go high to wrap up the ball, and at other times you’ll “go low” to get the player on the ground as fast as possible which gives your teammates the opportunity to compete for the ball at the breakdown.

This study, conducted by researchers from the School of Exercise Science at the Australian Catholic University in Brisbane in 2016 attempted to examine the relationship between changes in tackling ability, and muscular strength and power, during a semi-professional rugby league competitive season.

The research used twelve semi-professional rugby league players who underwent a series of physical tests before, during and after the preseason period. The participants were tested for upper and lower body strength and power to establish their baselines physical characteristics. Then the rugby players were put through a series of standardized 1on1 tackling drills. ‘Tackling ability’ was determined based on video analysis of the drills with a scoring scale from total success (10) to total failure (1) in the tackle.

The participants were tested again after round 15 of their season with results were compared to the pre-season results. What did they find? Changes in a 1RM squat and squat relative to body mass were closely correlated with changes in tackling ability.

There are three important things to takeaways from this study:

Defining a collision based on tackle data

This ACU research was specifically focused on rugby league players and tackling ability. But the lessons learned in the study apply to rugby union and all kinds of collisions on the rugby field. We mentioned in the introduction that rugby union involves many more collisions pppm than rugby league. For this article, we should define a ‘collision’ as any impact between two players.

Examples of collisions in rugby would include:

It’s our contention that the ACU research into tackling ability applies equally to all collisions. The lessons learned about the relationship between of lower-body strength and tackling ability are critical for developing training methodologies. Since a rugby player’s tackling ability will increase faster when they improve their lower body power, training programs should prioritize power development. One such program is our rugby leg workout for power, which if performed once per week during the rugby season has the potential to maintain or improve an athlete’s lower body power.

Despite very specific research, it’s difficult to pin down exactly what the most important physical attribute of rugby tackling is. In consideration of Strength, Acceleration or Power, all three physical abilities show a correlation with tackling ability. For example, in their 2015 study Speranza, Gabbett, Johnston, and Sheppard showed that upper-body power was a key factor in predicting tackling ability, most notably in 1st-grade rugby league players. However, this research only took a single data point, during the preseason and did not reassess the same players.

What do we know about collisions from tackling research?

If rugby players want to maximize the impact of their tackling training, they should seek to improve their lower body strength and power during the rugby season. Amateur players and coaches should consider testing the following regularly to ensure maintenance of lower body strength:

If a rugby player’s results in these standard tests decline, there is a good chance their tackling ability will suffer. 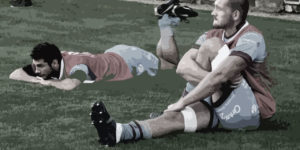 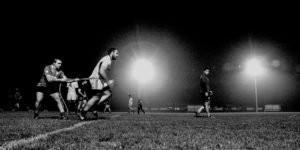 Are ruggers too focused on anaerobic training?