Sprint V High Intensity Intervals – which is better for rugby?

Rugby is primarily an anaerobic sport. A game itself might last 80 minutes, but that time is made up of lots of short, intense bursts of activity. Periods of play can vary from a few seconds to a minute or two but, because rugby is a team game, while the ball may be in constant motion, the payers are not.

Because of this, most ruggers quite rightly put a lot of focus on anaerobic fitness training, with high-intensity interval training (HIIT) being one of the most popular methods used. Steady paced cardio is still valuable, but it’s not the best way to get your body rugby-fit.

HIIT, as the name implies, involves doing brief bouts of high-intensity exercise interspersed with short active or passive rests. For example, you might run fast for 60-90 seconds, jog or walk for 60-90 seconds, and repeat the entire process ten times to total 20-30 minutes. Simple but effective.

Other forms of HIIT involve things like circuit training and other metabolically-demanding activities such as working the heavy bag, sled sprints and jump rope intervals.

Because of the prescriptive and purposely incomplete rest periods used in HIIT, the work periods are high intensity, but not maximal intensity. To do ten 90-second sprints, you have to leave at least a little gas in the tank so that you can complete the entire training session.

You might go all-in on the last interval, knowing your workout is finished for the day, but the rest of the intervals will have to be submaximal. And, as any rugger knows, HIIT workouts might be brief, but they are usually brutally painful. Lactic acid is produced in abundance, and many players complain of feeling sore and tired for days after an HIIT workout.

There is nothing inherently wrong with HIIT, and it’s an excellent way to develop anaerobic and aerobic fitness while burning a whole lot of calories in the process, but there is more than one way to develop rugby-specific fitness, and there is an alternative form of training that is worthy of your consideration – sprint interval training, SIT for short.

What is sprint interval training?

HIIT and SIT are easily confused. They both involve periods of high-intensity activity, interspersed with rests. However, there are some significant differences.

With HIIT, the intensity level of your workout is high, but it’s not maximal. Using the rating of perceived exertion scale, HIIT should take you to 8-9 out of a possible ten. Going flat out means you won’t recover in time for the next interval, so you’ll need to hold back – even if it’s just a little. You might feel you are working as hard as you can, but, in reality, accumulated fatigue means you won’t be.

With SIT, you work out at RPE ten – absolute flat out maximal intensity. There is no holding back, no pacing, and as the name suggests, this is a sprint.

Because of this, SIT intervals tend to be shorter, and overall workout duration is shorter too. Rests between intervals are longer to allow you to work at the highest possible level of intensity. With HIIT, overload and quantity are the name of the game. In contrast, SIT is all about workout quality.

A sprint interval workout for rugby could look something like this:

Unlike HIIT, SIT workouts are not accompanied by floods of pain-inducing lactic acid. You’ll be working very hard, but you also get a complete rest between efforts. Lactic acid doesn’t really get a chance to accumulate, and any that does build up dissipates almost entirely during the lengthy rests.

Instead, SIT works by exposing your body to the highest possible workload – maximal intensity. As the saying goes, every action has an equal and opposite reaction, and your body responds very positively to maximal intensity training. After all, according to the fitness law of specificity, you are fit for what you do.

Regarding the rests between sprints, SIT recovery periods are flexible and can be adjusted during the workout. If you feel you need to rest a little longer so that you can hit the required maximal level of intensity, that’s precisely what you should do.

You might only need two minutes rest at the beginning of your workout but then increase that to three and then four minutes during the middle and the end. Each work period should be more-or-less identical, with no drop-off in performance. If your performance starts to decline, increase your rest between sets.

The best SIT exercise for most ruggers is real-life sprinting. Not on a treadmill, which won’t go fast enough, but out in the track, rugby pitch, or even a stretch of flat, traffic-free pavement. However, you can also apply SIT to assault bikes and rower sprints. So long as you have the ability to go flat out, you’ll get the results and benefits this type of workout can produce.

Speaking of benefits, if you enjoy HIIT, and have found it to be beneficial, do you really need to stop doing it and replace your workouts with SIT? Maybe these stats will help you decide which method to include in your program:

In addition, because rugby is a sport that often involves maximal intensity activity, SIT may be more sports specific than HIIT. After all, if you are chasing down a loose ball, you don’t hold back and pace yourself because you might have to do it again in a minute or two. Instead, you go for broke and do all you can to be the first player to the ball. This, in essence, is what SIT is all about.

SIT workouts are shorter, potentially more rugby-specific, are not as painful but may produce better results than HIIT. The lower number of repeats may also mean that this type of workout is easier to recover from and will put less strain on your already battered muscles and joints. Initially, you might feel guilty that your SIT workout does not leave you panting, shuddering, puking, and soaked in lactic acid. But, unless you are a masochist, that’s a small price to pay for a workout that may produce better results for less time and effort. 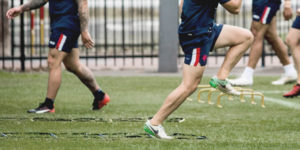 Can I improve my agility while traveling this summer?