Have you ever noticed how some rugby players just seem like they’re everywhere on the field? It’s usually the Flankers who are able to do this. That’s their role after-all. But what separates a blindside flanker who hits 20 rucks a game from an openside flanker who can hit 40 rucks a game?

We would argue it’s all about running lines. Today, we examine flanker running lines, to show how the best flankers in the world get from ruck to ruck.

Why hitting rucks is important

Helping your team secure possession by getting to a ruck situation is one of your primary jobs as a Flanker or a forward generally.

It’s also one of the least sexy parts of playing rugby. There are Flankers who will play entire games without getting their hands on the ball. Instead, they sprint from ruck to ruck either securing or contesting possession.

If you find yourself in this role, spectators will seldom see the impact you have on a game, but your teammates will understand the effort you put it and thank you for it.

Having a player or players that are able to get to hit multiple rucks in succession gives your team ball security. Ball security leads to pressure. Pressure leads to points. So while you might not score many meat pies as a Flanker, you’ll be the reason many of them are scored. Take pride in that, it’s something to cherish.

It’s a Flanker’s job to be involved in the game pretty much all the time. But that doesn’t necessarily mean that if you’re playing Flanker, you need to be sprinting all over the field constantly. Since you have to be making tackles, cleaning out rucks, contesting lineouts and scrummaging as well, it’s often best to avoid as much running as possible and save your legs for when they’re really needed.

The more running you can cut down on during the game, the longer you’ll be able to perform at your peak. Running tight support lines, as you’ll see below is one way to limit the number of miles you need to cover in a game. You’ll still need to put cardio work as a flanker. But by straightening your lines you’ll stand a better chance of lasting 80 minutes. If you care about game time, running tighter support lines can mean you’re in the game for longer.

Who runs the tightest lines?

Drum roll please. Nope, wrong! It’s not the Flankers. It’s actually the halfback (#9). The halfback’s job is to get to every ruck on the field as fast as possible. Granted when they get to the ruck they’re usually only responsible for throwing a pass rather than hitting a mound of bodies, but they get to the ruck fast is the point. If you want to learn how to run tight supporting lines on attack, you could do a lot worse than just following around your #9 at training or while you’re watching rugby games online.

The shortest distance between two points

Basic geometry is our friend here. Since a rugby field is two dimensional, it’s a guarantee that the next ruck will be on the same plane as the last one. So if a player (let’s call him Richie) is at point A and he needs to get to point B, what’s the fastest way to do that? Bang on! It’s a straight line. In the graphic below, you’ll see two rucks on the field. Richie needs to get from Ruck 1 to Ruck 2 by taking one of two routes. Which would you choose?

Ok that was an easy one. Clearly, you’re going to take Route A, because it’s the shortest distance to travel. As we mentioned above, the halfback on your team is probably going to take Route A as well. If you’re a flanker who is trying to hit more rucks, we suggest you follow the halfback and try to beat him to Ruck 2 (if you can, they’re slippery those halfbacks). Once you’ve won that little race, you can support the ball carrier at Ruck 2.

What about Route B?

Besides the length, what is the other major difference between the two Routes above? It might not seem obvious at first, but Route A will actually require Richie to run a line in front of the other attackers (shown in Blue).

However, if Richie runs a wide arc in support as is shown above on Route B, notice that they will pass behind the other attackers. Some coaches will suggest that players take a wide arc when running a support line for exactly this reason. It means that there is less chance of Richie getting in the way of a pass from the scrumhalf to the flyhalf.

But Richie doesn’t necessarily need to run behind the 9, 10 and 12 in order to stay out of their way. Richie can easily wait a few seconds either at the ruck or close by. He might even be IN Ruck 1. The point here is that it’s actually faster to not run anywhere than it is to start running in the wrong direction and then turn.

Play what’s in front of you

Even so, running a wide arc in support might not be the end of the world. If you’re running from one fixed point to another fixed point, you won’t necessarily be THAT much slower. But unfortunately, rugby is not that simple. When Richie leaves Ruck 1, he actually doesn’t know where Ruck 2 is going to be.

Part of the skill of a Flanker is the ability to anticipate the tackle situation based on the players on his team, the shape of the defensive line and the flow of the game. But if you run tighter lines, you can put yourself in a better position to react to the location of the ruck. Take a look at the graphic below. You’ll notice that Ruck 2 is actually much much closer to Ruck 1 than in the first example.

Now imagine that Richie chose Route B and is running towards where he thinks the next ruck will be. If the play changes, and Ruck 2 is actually much closer to Ruck 1, what can Richie do? The answer is, almost nothing. Having taken Route B, Richie is out of position to be effective at Ruck 2. His only choice now is to proceed to Ruck 3 or involve himself in the attack during the next play. Doesn’t sound too terrible, right?

But what if there are 0 players from the Blue team at Ruck 2? In that case, they might well lose the ball and there won’t be a Ruck 3. The point here is that Route A allows Richie to cover less distance between rucks while simultaneously being in position to be effective at the next ruck, wherever it occurs.

Putting it into practice

This skill isn’t going to be something you pick up in a week of training. In fact, most training session are not geared towards practicing these kinds of skills at all. Watching rugby can be one of the best ways to embed this in your rugby brain. The next time you’re parked in front of a match, notice the angles that the halfbacks on both teams take to get to the ruck. Focus on how they move to where they think the ruck will be, but that they’re always moving forward and towards the ball. 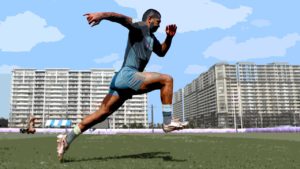