Rugby 7s season is here, and it’s time to think about how we’re going to get through those Saturday tournaments in the summer sun. Unlike its big brother (15s), Rugby 7s demands something unique of its athletes, the ability to perform, recover and perform again in quick succession.

The speed and intensity of a Rugby 7s game far exceed those of 15 a side rugby. And the energy requirements for the sport are also different. Today, we’ll examine how to use nutritional supplements, meal timing, and preparation to maximize your performance at a single or two-day Rugby 7s tournament.

PROGRAMMING OF A RUGBY 7s TOURNAMENT

The structure of a sevens tournament gives the sport its unique flavor. On any given Saturday, you’ll play 3-5 pool matches and then a semi-final and final. If we add that up, we’re talking about almost 120 minutes of game time. That’s a lot of rugby.

Especially when you consider that with seven players, you’ve got twice as much field to cover. And with only three replacements during a game, everyone gets a lot of running in during the day.

Let’s look at the programming of a 6-game rugby 7s tournament and see how it differs from playing a single game of 15s.

Does this look familiar? It should. Rugby 7s tournaments start earlier, run longer and require more consistent effort than a single game of 15s. The program above means that you’ll need to warm-up, play and cool down six times to come away with the silverware. That’s six times your body has to ramp up to 100% and then shut down to basically zero. This process takes a serious physical and mental toll.

To get through it, you’ll need to eat correctly, rest effectively and avoid over-exertion before games.

Rugby players need to train different energy systems when making the switch from 15s to Rugby 7s. Last week, Jules McCoy, former USA Eagles Women’s coach told us that rugby 7s requires players to be either running or sprinting for almost the entire game. Contrast that with flankers in the 15s game who spend “27% (of their time) jogging, 10% cruising, 14% striding, 5% high-intensity running, and 6% sprinting”.

Since you’re going to need more than 12 seconds of “go” to play sevens, we suggest focusing your nutritional attention on the short-term energy system. The focus should be on getting enough fuel into your body to last through each game, but not so much that there’s stress placed on your digestive system while you’re performing.

Organic Blueberries are one of the best fruits to consume for immediate energy. They’re made up of more than 90% carbohydrates and have a very low glycemic load. About a 1/3 the glycemic load of a banana for example. Blueberries are shown to provide cardiovascular and cognitive benefits as well. In particular, blueberries assist with the endogenous form of the enzyme called nitric oxide synthase (eNOS) which is associated with providing balance in the cardiovascular system. There are long-term benefits as well, but for rugby 7s, we’re more interested in energy and circulatory advantages blueberries give us over other fruits.

We suggest making bananas a standard part of your rugby 7s tournament diet. While having a higher glycemic load than blueberries, bananas are a potent source of short-term energy. Studies of endurance cyclists show that bananas are at least as good as “sports drinks” at providing fuel for the short-term energy system. Because bananas also contain significant fiber, they’re helpful with digestion as well. The fiber contained in bananas changes over time as “Pectins” cause the fruit to ripen. This process is somewhat complicated, but all you need to know is that as the banana ripens, the proportion of fructose goes up which helps to normalize the rate of carbohydrate digestion.

With Turkey, Tomato and Spinach on wheat bread

During a day of rugby sevens games, you’re going to need something more substantial than fruit and nuts. Our recommendation is Turkey sandwich with lean meat and a few light vegetables. This Turkey meat is the only major protein source we’ve added to this game day meal guide. Protein is eventually digested and turned into energy, but this process happens much slower than with complex carbohydrates.

The protein you consume around midday will be available come the semi-finals and finals, though. We advocate for fresh uncooked spinach for its magnesium content. Despite popular myths about electrolytes, minerals like Magnesium have not yet been shown to increase your cramp threshold frequency (a key factor in muscle cramping). But being magnesium deficient can reduce your CTF and susceptibility to cramping. Eating fresh spinach both before your sevens tournament and during lunch on game day is the best dietary method to guard against muscle cramping.

Here’s our shameless pitch. The only nutritional supplement that you should add to your rugby sevens diet is Beet Elite (or SuperBeets). Why? Dietary nitrates are an activator of Nitric Oxide (N-O) in the body. This signaling molecule, N-O, is recognized by both the medical and fitness communities for its numerous and significant roles in athletic performance.

Among the primary benefits of N-O for athletes:

Beet Elite is the endurance supplement of choice for dozens of professional rugby programs. To find an example of this, you need to look no further than the USA Eagles and the USA Eagles Sevens, who will be competing at the Rio Olympics this year. Both programs utilize no2 boosters with their athletes in the days before a competition. We find that they’re equally good at a sevens tournament in preference to caffeine-based pre-workout supplements.

As our rugby-day nutrition guide, outlines, small amounts of caffeine can be effective nutritional supplements for 15s players. However, when you consider the sporadic physical demands of sevens, caffeine is not well suited to providing the required energy. So while we do advocate the use of energy gel packs, it’s critical to get the ones that are caffeine-free. Powerbar is the best brand of energy gel packs in our opinion. Do with that what you will.

Now that we’ve laid out what your rugby 7s diet should include, let’s talk about the stuff you’ll want to avoid as well. In particular, the great menace, caffeine. Primarily in the form of pre-workout powders, red bull, and coffee.

What happens each time you consume caffeine? Your brain sends a message to the pituitary gland, tells your adrenals to produce the stress hormones adrenaline and cortisol. Now, in small doses, both of those hormones are beneficial for athletic performance. But by triggering this process, you’re artificially eliciting a physical response in line with imminent physical danger. You can’t do this repeatedly. More specifically, your adrenal gland cannot handle this kind of hormone production. After a certain point, putting more caffeine into the system stops correlating with increased levels of adrenaline and cortisol.

So if you’re reliant on caffeine as your primary source of energy, you are going to hit a wall eventually. It’s just a matter of when. We heavily advocate against the use of caffeine at rugby sevens tournaments. If you feel like you need caffeine to provide your energy, it probably means you’re not eating correctly. By incorporating the foods we’ve outlined here, any reliance on caffeine can be reduced.

So that you know we’re not completely biased in our opinions here, let’s take a minute to explain why one of our products should absolutely not be used during a sevens tournament either. Caffeine and vitamin-based pre-workout powders provide a short-term energy boost that is very very hard to replicate. A single scoop of Pre-Game contains 100% of a 200lb male’s recommended daily caffeine intake. You simply cannot use this kind of nutritional supplement 4-6 times during a rugby sevens tournament and expect good things to happen.

The stress on your adrenal gland and cardiovascular system combined with the dehydrating effect of playing in the summer sun means that using caffeine-based pre-workout powders, in particular, isn’t just unwise, its potentially dangerous. If you absolutely must, that is if you’ve exhausted all other options, you MIGHT be able to use a small scoop before a 6:00pm final. But other than that, please avoid using this altogether at single day sevens tournaments this summer.

As we mentioned above, some protein is good. But you shouldn’t be throwing down multiple whey protein shakes during a rugby 7s tournament. In fact, its best to stay away from most protein sources between games. We make an exception in our meal plans to allow for a lean turkey sandwich, but that’s the extent of the protein consumption during tournament day.

If you have leftovers from your dinner the night before a rugby tournament, it’s probably best to leave them at home. Concentrated carbohydrates like grains take as many as two hours to digest properly. Starchy vegetables like broccoli and sweet potatoes aren’t quite as bad, but they don’t digest quickly either. The combination of both of these can sit in your stomach for hours, and that’s not ideal for athletic performance. Leave the sweet potatoes, rice and beans in your fridge. 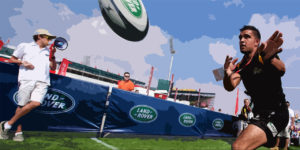