Rugby players, like the rest of the athletic community, are often playing and training in a chronically dehydrated state. Proper hydration is one of the least talked about aspects of nutrition and performance in rugby. This is because ruggers probably think “I know how to drink water.”

It’s not as sexy as talking about a leg workout or a cardio program. But how many rugby players do you know who forget their water bottle at training? How many have you seen smashing sugar-based pre-workouts and sports drinks? We all need a re-education in hydration and how to hydrate as a rugby player to optimize our on-field performance.

How important is hydration for rugby?

Water is the primary driver of health, growth and muscular development in humans. It’s also the most critical nutrient for athletic performance, more important even than glucose or ATP.

The human brain is composed of over 95% water, while normal blood is around 82%. This means that not only is water the most essential nutrient in the body, it’s also the most abundant.

But water needs to be in equilibrium with the body. A slightly elevated or lowered level of body water can cause shrinkage of the brain, impaired cognitive and neurological functions and a slow-down in muscular response that results in a deterioration of athletic performance. All of that is to say, that you need to be properly (but not overly) hydrated to be a good rugby player.

The feelings you sometimes get of being tired during the day. Or of being sluggish at the start of rugby training can often be attributed to mild dehydration. Americans don’t drink enough water during the day. Some estimates put the number of people suffering from mild dehydration at over 75% on any given day. For the average person, this can lead to kidney diseases, improper electrolyte balance and impaired digestive functions. For elite and amateur athletes alike, mild dehydration is often the cause of under-performance on the field.

Every rugby player should be aware of what water actually does in your body. Water:

The dehydration fallacy of cramping

It was long believed that muscle cramping in athletes was caused by simple dehydration. Every year this causes hundreds of amateur rugby coaches around the world to scream “get him some water” when a player goes down with cramp towards the end of the game. The reality is much more complex. In 2011, researchers at the University of South Dakota showed that when you remove fatigue as a factor, cramping can be induced at various different levels of hydration.

What does that mean? That muscle cramping in athletes is the result of fatigue not of dehydration in the muscles. One of our blogs from earlier this year goes into great detail about how to avoid muscle cramping in rugby games. Check that out for a more in-depth analysis of the dehydration fallacy of cramping. Needless to say, it’s not caused by a lack of water.

How you lose water (dehydration)

The two key metabolic processes that cause water loss in the body are perspiration and respiration. During physical exertion, these processes are accelerated as the body works to regulate its internal temperature. Sweat, for example, is really the body’s attempt it bring down its core temperature through the evaporation of fluids from the skin. As the sweat evaporates from the skin, it takes the heat with it. Heavy breathing and the resultant increase in Oxygen intake through the lungs is designed to drive said oxygen out to peripheral muscles. But it also causes more water to be dispelled through the mouth and nose than would typically be the case.

Some rugby players have been known to lose as much as 12lbs of fluid during a game. On a hot day, this loss can be even more significant. 12lbs of fluid isn’t necessarily a huge deal for someone who weighs 250lbs. But if you’re 150lbs, then this amounts to almost 8% of your total body mass. That kind of fluid loss can cause significant declines in the kinds of metabolic processes we’ve spoken about here. The brain and body can quickly become overheated for example and without water to regulate this temperature, declines in performance are guaranteed, and permanent damage is not unheard of.

Too much of a good thing (over-hydration)

Over-hydration was the scourge of endurance racers for most of the early 2000s until it was found that ingesting too much water during racing resulted in a significant decline in blood sodium levels. This decline causes many of the same problems that result from dehydration including nausea and fatigue. For endurance athletes, who very often will eat a low-carbohydrate diet similar to the All Blacks rugby team, this is especially problematic as low-carb, and ketogenic diets accelerate magnesium, calcium, and you guessed it, sodium consumption in the body.

A negative imbalance of sodium int he blood is now known as Hyponatremia and is characterized by your blood sodium concentration falling below 135 milliequivalents/liter mEq/L. When you enter a Hyponatremic state, your body flushes electrolytes. Electrolyte loss in this way can impair the regulation of fluids inside cells and lower the pH level of your blood.

Unfortunately for us, the sports drink industry has been pushing the use of glucose-based sports drinks for a number of years now to great effect. While these drinks do provide some potassium and sodium as part of their sugary-ness, they’re critically low on calcium, magnesium and chloride. In some cases, their sugar content can even be dehydrating!

Remember we talked earlier about muscle cramping in rugby players not being the result of dehydration? Well here’s another important thing to understand about over-hydration. You can’t become less prone to cramping by consuming more water. But there is some research to suggest that a lack of magnesium and potassium in the blood, caused by over-hydrating, can reduce your cramp threshold frequency (the point at which your muscle cramps) below its normal point. So not only won’t drinking more water make you less prone to muscle cramping, it may actually increase your risk of cramp if you’ve over-hydrated to excess.

What should you hydrate with?

Yes, you can hydrate by drinking water. But remember, over-consumption of water has its own negative effects. Instead, we suggest trying these two hydration drinks which have additional benefits aside from the fluid intake.

A study by researchers at the University of Singapore in 2015 found that “there is growing evidence to suggest that ingesting ice slurries are an effective and practical strategy to prevent an excessive rise in core body temperature and improve endurance performance.” We can’t find any recipes for Ice Slurries online. Perhaps someone in the rugby community can put a link in the comments section if they know of one?

We’re spoken at length about the endurance benefits of beets for rugby players. But we’re mostly talking about ingesting whole beets or drinking Beet Elite mixes. But there been several academic studies into the use of nitrate supplements in the form of Beets by endurance athletes. This paper from University of Exeter researchers found that dietary nitrate NO3 (-) enhances repeated sprint performance and may attenuate the decline in cognitive function (and specifically reaction time) that may occur during prolonged intermittent exercise. Meaning that nitrate supplements, can not only hydrate you but potentially help your body and your brain perform better during intermittent exercise.

When Should Rugby Players be Hydrating?

We’re going to discuss game-day hydration in a moment. But before we get to that, let’s spare a thought for training days. Rugby training very often lasts longer than the standard game. Particularly if you’re a player who is likely to be replaced or is coming off the bench during games. Yet the vast majority of us are probably guilty of under-hydrating before rugby training on a regular basis. Perhaps through apathy or disregard for ourselves, we forget to ingest water before training and then after an hour of rucking drills we finally realize we’re thirsty and didn’t bring a water bottle.

This practice needs to end. Rugby games are won and lost on Tuesday and Thursday nights. This is where we form connections with our teammates, gain an understanding of the physical space on the field and learn (or try to learn) where we’re supposed to be at any given time. How are you supposed to do that if you’re mildly or even severely dehydrated? The answer is, you can’t. Before your team adds a 3rd training session to its weekly allotment, consider giving every player some water before training and see if the performance standard doesn’t go up dramatically.

Rugby players should always hydrate pre-game since they are about to expend a tremendous amount of energy, and their body temperatures are going to increase. Before stepping on the field, the rugby player should drink 8-12 ounces of cold water every hour before a game, and then double that right before game time. (6) Cold drinks like ice slurries help to cool internal temperatures to retain cognitive performance under stress.

Even after the game starts, it is important for rugby players to continue to hydrate during breaks. It is during the game that the most sweat and electrolyte loss is going to happen. We recommend rehydrating with electrolyte-based drinks after every 20 minutes of playing in the game, and of course at halftime. Cold beverages should always be available to players to help reduce core body temperatures.

A player can lose up to 32 whole ounces of fluid every single hour during high-intensity exercise. Re-hydrating at the end of your rugby game is critical to speeding up your recovery time. But how much fluid do you need to ingest at the end of the game? It’s a simple question of math. Before the game, you should jump on a set of scales. At the end of the game, get back on them. Whatever weight you’ve lost during the game needs to be replaced in the form of water and nutrient-rich post-workout supplements. 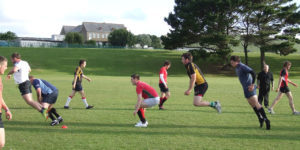 Can you get rugby-fit without eating breakfast? 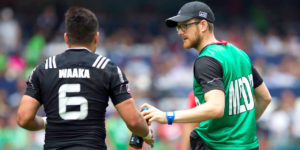