Matt has recently retired from Rugby, but today he is a successful entrepreneur with his own security company Safe Simple and Secure, his security app and has many other successful investments and projects in the works.

He was also an excellent center on the rugby field.

Matt is still a fast, dominant player on his day. He possesses a superb hand-off/fend and is a try-scoring machine throughout his career. Matt’s story is fascinating as he never entirely made the next step into professional rugby even though he was good enough.

But lessons learned from his insights and experience might help you make that step up to the next level.

Matt grew up in a small town just outside of Edinburgh called Penicuik. His first experiences, like many to Rugby, were tagging along with his Dad and his mates to the local rugby club, watching games and playing with the other rugby kids. Through his Dad’s network and friend circles, he had access to some of Rugby’s ‘ greats’ such as Jim Aiken a former Scotland captain and British Lion!

Matt played for teams in Scotland such as Boroughmuir, Watsonians, Stewart’s Melville and Falkirk. Throughout his playing career, Matt mentioned how hard it was for a young kid from out of town to play in the Edinburgh competition. Initially breaking into the starting team and being a first choice winger was a hurdle to overcome. Other difficulties were fitting into training squads that already had close-knit friendships and securing a starting spot after injury.

Scoring multiple tries, tackling well and running at his best, Matt still remembers his lack of confidence. Much of this stemmed from the team around him as it was full of future Scotland stars. A lot of big names within those squads went on to full-time professional careers. They included the likes of Alasdair Strokosch, Chris Cusiter, Mike Blair, Kevin Mckenzie (Scotland), Mark Mckenzie (Scotland A), Keepa Mowat (Bay of Plenty, NZ) and current Scotland flyhalf, Finn Russell!

Some of Matts fondest memories were playing for Falkirk. At his first training session, he knew no one but was quickly made to feel welcome and integrated into the team. Matt spent seven years at Falkirk and attributed his success there to the friends he had and made, always celebrating and socializing with his teammates and feeling accepted within a winning team culture. Having mates within the team helped with his confidence and allowed him to play his best.

A career of injuries

“I remember once writing, a ship is safe in the dock, but that’s not what it’s built for.’ said Matt about his rugby career.

I think this sums up my rugby life. I got over all of the injuries, and none of them is a problem for me now. The reason I recovered was through the rehab I did. I trained hard, rested when my body told me to do so, and my nutrition was always on point. I followed the 80-20 rule most of my life which was 80% of my training and diet is perfect and 20% doing just what I wanted or maybe not so perfect!” he said.

Could I have been a professional?

“Maybe if I’d had the confidence I do now, maybe if I’d trained smarter (not harder as I trained pretty hard), maybe fewer linear weights and more skills and functional movements,” says Matt.

My training was good, but if I’d had the right training earlier, it would have been much more impactful to my game. One thing I do know is that I got pretty close to being a professional and enjoyed all of it. However, I wish I could start off tomorrow as an 18-year-old knowing what I do now!”

This lack of confidence Matt talks about is shared by a lot of other rugby players throughout their careers. Believe it or not, Dan Carter had some self-doubt as a youngster.

“I had it my whole life until around my late 20’s. I was told time and time again by various people that I was good enough. But I refused to believe it,” he says. “I would always worry about the player I was up against. Was he better, younger, faster, stronger, bigger? All these things went through my mind.”

“If I had a good couple of runs or something positive happened I would settle into the game. If I made a mistake my head would fill with insecurities and my game would suffer,” says Matt. “This lack of confidence or self-belief I think is the difference between making it into the professional ranks and not.”

A real professional can forget mistakes and move on. Whereas an amateur still struggles with the memory of the error. Matt believes that having the right strategy or tools to help overcome doubt might have changed the trajectory of his career. “I should have shared my experiences with the people close to me so I could improve and take my game to the next level,” he said.

To be confident makes you seem like you are unstoppable. You believe you are good enough and you think you deserve to be there. If you don’t believe in yourself why should anyone else? Other players are just the same as you; they are only human. Do your best and have the mindset of learning and improving. If that doesn’t work, you can still say you gave it everything. “I believe I did this at the time, but I wish I had asked my coaches what I needed to do to be good enough and worked on that,” he says.

“I now fill my time with family, work, Crossfit, and weightlifting. I like to look good but not huge, eat well and stay healthy! I am 36 this year and honestly still feel 20,” Matt says.

Looking back on highlights

“Winning the Melrose Sevens in 2002, scoring a hat-trick in my first league game in 2003 against Melrose and finishing my career with two years being the top try scorer for Stewart’s Melville – those were my highlights,” said Matt.

“He still is and will always remain the single best player I’ve ever played with! I luckily class him as a close friend too. We would shake hands as we ran onto the pitch before every game and when we did I knew we both felt the same and the game was going to be a good one” – I would feel confident and think ‘let’s do it.’ 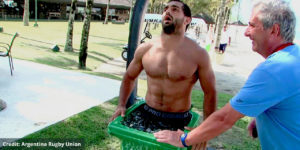 Why contrast baths are so good for post-rugby recovery 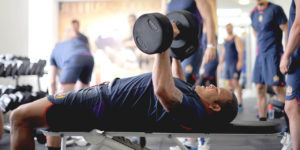